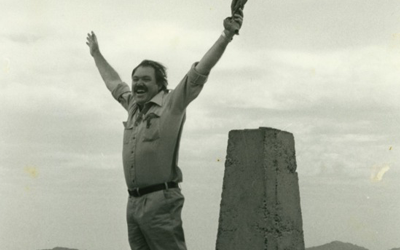 In January I said goodbye to my father, Joe Glascott. My dad was a loving husband, adored father and grandfather and his passing is a huge loss for our very close family.

Country born and bred, dad was passionate about nature and through his work he was instrumental in saving some of Australia’s most significant landmarks and natural environments.

After spending time in New York as a political correspondent reporting on Watergate and other historic events, dad and mum with three kids in tow returned to Sydney where he took a post at the Sydney Morning Herald as their first “environment writer” – making him Australia’s first environment journalist.

Dad wrote about and informed on many important issues including Tasmania’s Franklin Dam and the Daintree rainforest in Queensland. His writing was instrumental in saving the NSW rainforests and the Norfolk pines at Manly beach and he successfully argued to retained historical built environments such as Sydney’s Queen Victoria Building, Capitol Theatre and Walsh Bay Wharf.

His passion for the environment was unbounded and his contribution significant. In 1987, the United Nations included him on a list of the world’s 500 most influential environmentalists for his outstanding contributions to protection and improvement of the environment. Instead of resting in retirement, dad went on to champion causes around Sydney harbour foreshore and worked with Sydney Botanic Gardens on the board of the National Trust. He received an Order of Australia medal in 1982.

It’s obvious where my passion and inspiration for the environment comes from. Dad’s life was rich and therefore so was ours. He made a big impact on those he met and has left a lasting and significant legacy, one we can all be grateful for and that I’m extremely proud of.

To find out more about Joe’s extraordinary life, read his obituary in the Sydney Morning Herald: http://www.smh.com.au/comment/obituaries/obituary-joe-glascott-influential-journalist-was-instrumental-in-saving-nsw-rainforests-20160119-gm9n58.html