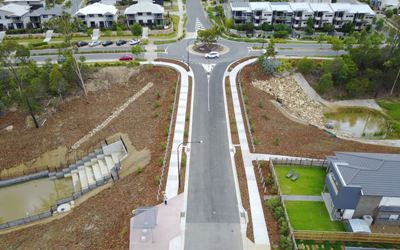 Springfield Lakes is an award-winning masterplanned community, situated in Springfield – one of the fastest growing regions in South East Queensland.

Glascott were engaged by Lendlease and contracted under Shadforths Civil Contractors to deliver landscaping on the final stage at Parkland Drive. Designed by Cardno, the works included concrete pavement and concrete sleeper bollards to create the footpath, concrete cubed seating and shelter, as well as street trees, plants, and turf.

Garth Eagle, Glascott’s Queensland Manager, says they were thrilled to be working with Lendlease.

“Glascott has delivered masterplan residential communities for Lendlease in NSW and ACT so I was delighted that we could showcase our capabilities in Queensland. The project went well and we look forward to working with Lendlease again in the future.”

The team worked through some pretty intense heat to deliver on a tight timeframe with completion just prior to Christmas.