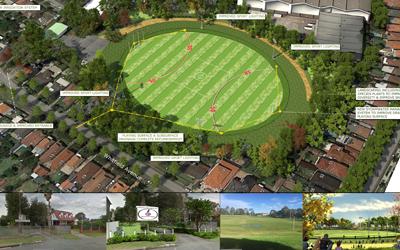 With a number of large ovals under our belt, we are delighted to deliver Wagener Oval for Canterbury Bankstown Council.

Reducing costs and benefiting from soil reuse, our team has screened around 3,200m³ of existing site soil and imported nearly 9,500m³ of clay to create a new capping layer. Along with the soil reuse and new capping, Glascott have accepted 190m³ of sand for soil amelioration from an approved EPA site & 1,300m³ from another building site.

A new Leachate system has been installed, which required large quantities of liquid waste to be removed via sucker trucks & disposed of at a certified facility for treatment. This was due to the deep excavation required to install the new system to ensure sufficient collection of the underlying leachate being generated by the old landfill.

Along with the large amounts of material imported and reused on site, Glascott along with our subcontractors have installed two new 35,000KL irrigation tanks and a new irrigation system. A new upgraded lighting system comprising of four new 25m light poles and an upgrade DB board. The final piece to the puzzle is the laying of roughly 20,000m² of new agridark maxi rolls.

Wagner Oval upgrade started May 2017 and will be handed over to Canterbury Bankstown Council in the coming weeks.