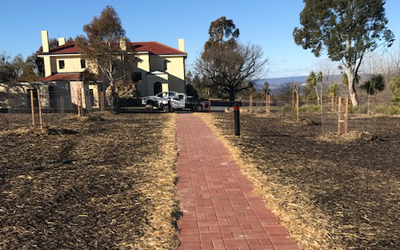 Mount Stromlo Observatory is located just outside Canberra and is headquarters to ANU’s Research School of Astronomy and Astrophysics – a world-respected community of researchers.

Popular with photographers and visitors, the Observatory has views across Canberra and the Brindabella’s and an abundance of wildlife.

In 2003, the devastating bushfires caused significant damage at the site with five historical telescopes destroyed along with the workshops, library, administration building and the original Director’s Residence and orchard which had been planted by the Duffield family in the 1920s.

Over time the site has been carefully restored. The original Director’s Residence was stabilised and transformed into an exhibition space with the fire damage retained as part of its historical significance.

Glascott’s were contracted to deliver landscaping works including relocation of a car park which had been temporarily located on the site of the orchard after the fire. Other works included preparing the site of the new car park, creating the car park access stairs, installing bollard lighting and relocating a stone wall. Large boulder rocks were strategically placed to keep vehicles off the new grass areas and garden beds created for aesthetics.

Excavation was difficult at the site due to the mostly rock surface. The low-voltage lighting system was installed into a shallow trench, removing the need for 240 volt-mains power line at the normal depth of 600mm. The site is very exposed and subject to extreme weather conditions including high winds. New irrigation lines were installed to ensure adequate watering in the warmer months, and to help mitigate risk of bushfire.

The original orchard was re-established but this time with mock fruit trees to deter the wildlife. A new path created with materials that match the original pathway now connects the Director’s Residence with the Commonwealth Solar Observatory Building, and picnic tables have been relocated from the ANU Campus to the orchard for staff and visitors to enjoy.

With the recent works complete, Mount Stromlo Observatory is back to its former glory with staff and visitors enjoying the new facilities.