Landscaping Our History At The National Boer War Memorial 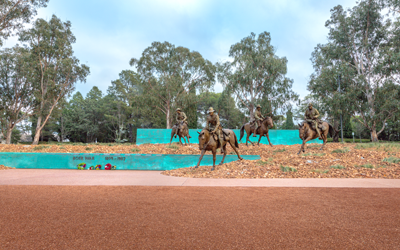 It was a special day for the ACT division of Glascott on 31st May, 2017! Manager Matthew Elliott explained, “We were honoured to help create this important historic legacy. With the project funded mainly from public donations we focused on working efficiently to deliver a memorial that makes everyone feel proud.”

And they succeeded! In brilliant sunshine, before a crowd of 1200 guests, The Boer War Memorial was dedicated by the Governor – General, General Sir Peter Cosgrove MC, KM.

Australia’s most historic avenue, Anzac Parade, finally has its tribute to the Boer War, 1899 – 1902. On this historic site the only gap in the recognition and remembrance of our country’s commitment to overseas conflicts has been filled.

Australia was still a collection of states when the war in South Africa erupted but we became a Commonwealth on 1st March,1901 and our new parliament took over the business of the war. Our soldiers were mainly men from the bush and many were skilled horsemen.

The National Boer War Memorial Association was formed to raise funds and public awareness for the need of a memorial to mark Australia’s first overseas conflict, and our third worst in terms of casualties. A site for the memorial was secured in May, 2008 and the final design was chosen from a national competition in 2012.

Four bonze light horseman sculptures, 1.5 times life size and created by renowned artist, Louis Laumen were carefully placed in the new surroundings. A journal and plaques containing historical information were also installed. It is a magnificent sight and a worthy one to commemorate the 1000 men who lost their lives in that campaign!

Glascott has worked on other memorial sites including the restoration of ANZAC Square in Brisbane for the 2015 Centenary.