Southport gets new boardwalk for GC2018 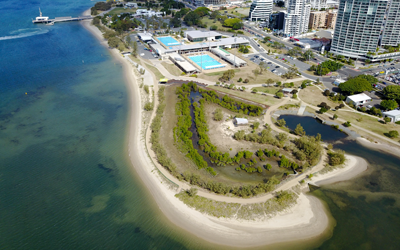 Glascott recently handed over Southport Boardwalk, Stage 3 – Mangrove, part of the Southport Broadwater Parklands expansion for City of Gold Coast that are part of preparation for the Gold Coast 2018 Commonwealth Games (GC2018).

Designed by AECOM, Glascott undertook construction of a large timber viewing deck at the northern end of the Aquatic Centre, which is where the GC2018 Marathon will finish. Shelters and recycled timber seating were also installed providing spectators with a comfortable viewing area, and surrounding landscapes were revitalised for long term growth.

Being on the coast, the environmental controls were vitally important during construction along with monitoring tidal changes so that earthworks, timber piling and formwork could be coordinated in a timely manner and completed according to the project timeline.
“It’s always challenging working on the coast and in the elements but the project ran smoothly and we are really happy with the result,“ said Gareth Eagle, Queensland Manager of Glascott.

Glascott have developed a reputation for professionalism and quality, which were mandatory for the project when it will be on show to the world. The work was already put to test with the 2017 Gold Coast Marathon taking place at the end of construction. And we’re happy to say, it stood up well!

“There were no issues when the marathon was held so soon after completion. It was great to see spectators enjoying the viewing deck and boardwalk, Mr Eagle said. “It’s an exciting time for City of Gold Coast and we are delighted to have helped them prepare for GC2018.”

The Broadwater Parklands upgrade was officially opened on 27th August with dignitaries and media attending.