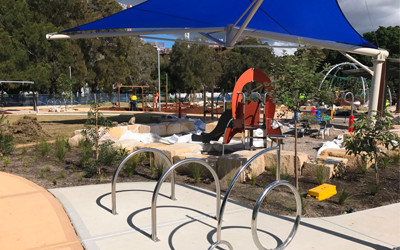 Cahill Park Playground is the second of three projects Glascott Landscape & Civil will have undertaken for Bayside Council this year.

The playground is situated 50m from the Cooks River and is prone to flooding. Playground levels were raised significantly to allow for the one in a hundred year storm event and for king tides. Also subgrade conditions were poor. The geotechnical investigation and report highlighted several problem areas with poor bearing capacity. This meant the structural components needed to be carefully engineered to suit the 50kpa bearing capacity.

Furthermore, a High Pressure Gas line was found to be running through the site on the original survey plans. The private gas line runs direct from South Australia to a nearby manufacturing plant. Glascott contacted APA Group – responsible for overseeing construction works within the gas easement – to supervise the early stages of construction.

Glascott managed the process ensuring minimal time was lost in scheduling the work, which included Non-destructive excavation and surveying of the gas line with construction of a reinforced concrete protection slab at the site entry. The protective measures outlined by APA were implemented inclusive of delineation of the service easement and limitations on weight and vibratory compaction in certain areas.

With the site ready, the team constructed the new playground and even delivered the project ahead of program. Bayside Council are pleased with the result and have since awarded Glascott Landscape & Civil with another park and playground project; Eastlakes Reserve, already underway.