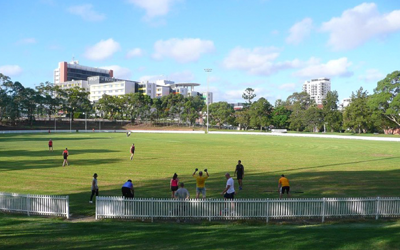 Gore Hill Park Redevelopment is a $10.5 million project for Willoughby Council with $9.5 million of funds provided by the Federal Government’s Community Development Grants Programme. The park has been a sporting field for over 90 years and was in need of an upgrade to support the needs of the growing community.

Through in-depth experience in sports facilities construction, and accreditation from the Office of the Federal Safety Commissioner (OFSC) making them eligible to work on a federally funded project, Glascott were awarded Stage 1 which commenced in November 2017 and is expected to be complete by early January 2019.

STORMWATER CATCHMENT MEGA TANK
Construction is now 80% complete with a large portion of time going into the construction the on-site stormwater detention system. On two occasions the teams were up at 4.30am to pour the concrete over the 2.4 Megalitre capacity stormwater tank, designed in conjunction with Panthers Concrete Tanks. The tank sits below the new synthetic field and will act as temporary water storage during major storm events so the oval and areas downstream do not flood.

An upgrade to the existing sports field lighting was required for the project, to facilitate future maintenance access constraints, hence Seesaw poles were chosen. As the name suggests, the system facilitates the upper part of the pole to seesaw down by use of an electric winch, taking approximately 7 mins to drop and raise the poles. Willoughby City Council will find significant time and cost savings during on-going maintenance.