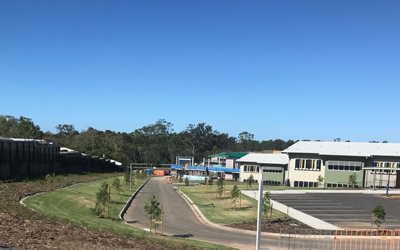 After our successful partnership at AVEO Durack aged care facility, Glascott are delighted to work with FKG Group again on the new Coomera Amity State School, which will provide additional primary aged education facilities to support the growing community.

Vee Design provided the landscape architecture, which sees our team delivering predominately large scale softscape works encompassing gardens and turf areas around the new buildings along with the amelioration of site soil. Other elements include a number of synthetic turf finishes to the four play areas, the sports oval, furniture and various sandstone block seating areas. Automatic drip irrigation is being installed to service the garden areas and an automatic spray irrigation system for the oval.

The project is being managed within a tight timeframe and in conjunction with the various trades on site. The team managed potential flooding from the heavy rainfall last month and the project is on schedule with Stage 1 works to be ready for the new school year in January.  Stage 2 will be completed during first term.